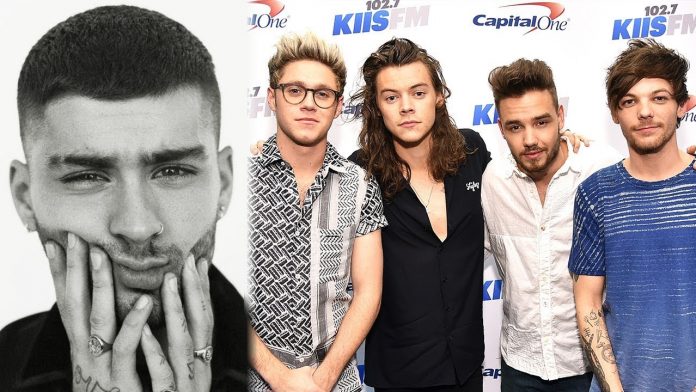 More Celebrity News ►►
As every Directioner knows, Zayn’s departure from the band caused quite a rift between Z and his former bandmates.
I mean, who could forget that crazy Twitter fight between Z and Louis shortly after he left? Anyway, things eventually simmered down between the two and in the last couple of years many were curious to find out if Zayn’s relationship with the guys changed after One Direction announced they were going on a hiatus.
Well, there are a TON of quotes out there – and quite frankly there are TOO many to go through – but fans last heard from Louis back in August 2017 that he and Zayn got back in touch after Louis’ mom sadly passed away and the two are trying to rebuild their friendship.
As much as we’d all like to believe that the guys are all friends again, that’s not the direction this story is going. In his feature piece with Vogue, Zayn got super candid about his time in One Direction and actually revealed that he did not make a single friend during his five years with the band – kinda hard to believe, right?
While that bit of information may be surprising to us — especially since it seemed like Zayn and Louis were so close during all of those years – Z revealed that that’s just his personality. He told Vogue QUOTE, “I have always been like that, though – always a bit of an island. I don’t like to confer with too many people.”
When Z was asked if he has seen or talk to Louis, Harry, Niall, or Liam he replied QUOTE, “Nah. I ain’t spoke to any of them for a long time, to be honest with you. That’s just the way it is. There’s things that happen and things that were said after I left… Snide things. Small things that I would never have expected.”
Well, it sounds like Zayn has completely moved on from his 1D past and it doesn’t seem like he’s too bothered by his non-existent relationship with the guys.
Are you surprised to find out that Zayn hasn’t really kept in touch with any of his former bandmates? Let me know your thoughts in the comment section below. When you’re done with that, click over to the right to watch another new video and don’t forget to subscribe to our channels. Thanks for hanging with us, I’m your girl Erin Robinson and I’ll see ya next time.