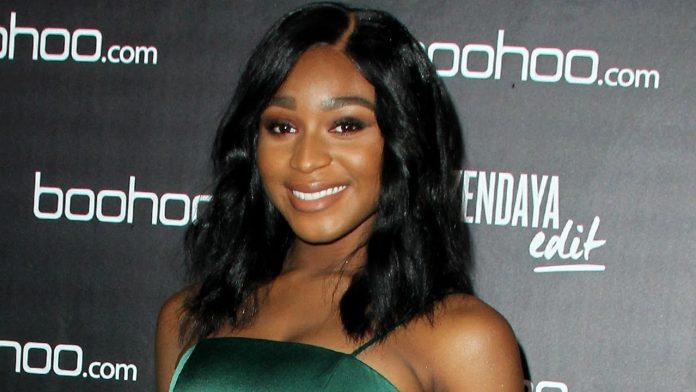 And she only has nice things to say, of course.

It’s been a tough week for Harmonizers following the announcement of 5H’s “indefinite hiatus”, and while most fans are super supportive of the girls’ plans to focus on individual projects, the news still stings a bit.

Through a group statement to fans on social media on Monday, Fifth Harmony made their hiatus news official. Some saw it as a long time coming, while others are still in shock and hoping that this really is a temporary break, and not the end. But one thing fans haven’t gotten is individual statements on the matter from the ladies themselves–until now.

Normani Kordei was at the Boohoo.com launch of their new Spring collection on Wednesday, which also previewed Zendaya’s “Zendaya Edit” line with the brand. Entertainment Tonight caught up with Normani, and she had a message for all her beloved and heartbroken Harmonizers. She said QUOTE, “Oh, I love you guys so much and you made it the best time of my life…I’ll never forget it.”

Okay wait, is it just me or does that sound like an actual goodbye to Fifth Harmony forever, rather than a “so long for now” kind of comment? We know how One Direction’s so-called hiatus is turning out, and frankly it’s just too hard to imagine that 5H will go the same route.

One publicist opened up to Billboard why bands announce that they are going on hiatus rather than breaking up, revealing QUOTE, “It is smart…It gives them them some cushion to see if each can succeed individually. And importantly, it avoids fan hysteria about who is at fault and the negativity that arises as fans pick a foil for a breakup.”

One thing we don’t predict happening any time soon is drama coming between the ladies, as we’ve been assured that there was no beef or tension among them that lead to the split. One source told ET QUOTE, “They’re happy and supportive of each other. There is no drama about this hiatus.”

It’s a lot more comforting to know that the girls still love each other, are still BFFs, and want the best for each other as individuals. That kind of bond definitely gives us hope that the girls WILL reunite and work with each other again at some point down the line.

Alright guys now I wanna hear what you think of Normani’s comment–do you think it’s a clue that this hiatus is more of an official band breakup? Sound off with your thoughts in the comments, and after that click over here to see why fans think 5H were laughing at Camila in a recent interview. Thanks so much for watching News Feed, and be sure to subscribe for more Clevver! I’m your girl Joslyn Davis and I’ll see you soon!

Cardi B SLAMS Nicki Minaj Over Accusations She Pays To Play...

Bhad Bhabie GOES OFF On Nicki Minaj & Cardi B &...