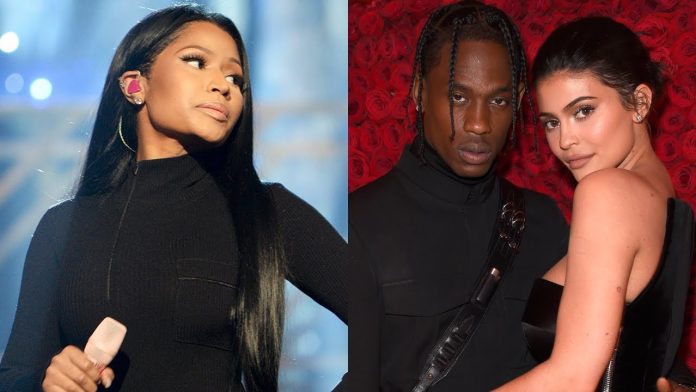 Only a day after slamming Kylie Jenner and Travis Scott, Nicki Minaj will be seated inches away from them at tonight’s VMA’s. Talk about AWKWARD!!

Sorry Nicki but the throne still belongs to Travis Scott for now. The rapper’s new album, Astroworld topped the Billboard 200 chart on Sunday for the SECOND week in a row while Nicki’s latest album, Queen debuted at number two and she’s NOT having it.

According to Nicki, Astroworld is only at the top of the charts because of Kylie Jenner’s influence. Kylie recently posted a picture of the Astroworld album on Instagram captioning it “me and stormi ready for tour” with the direct link to Travis’ ticket website. Nicki took to Twitter to slam Travis and Kylie tweeting: “I put my blood sweat & tears in writing a dope album only for Travis Scott to have Kylie Jenner post a tour pass telling ppl to come see her & Stormi.”

But then, hours later, Nicki tweeted she wasn’t upset with Travis despite the twitter rant saying, “People are calling me thinking I’m huffing & puffing. Omg y’all this is sarcasm/dry humor. Yikes, I’m having the most icoNIC time[…]When people call me & hear me cracking up laughing they seem so puzzled. Loosen up.”

Travis and Kylie have NOT addressed Nicki’s tweets, but they may run into her in a matter of hours: The rapper is supposed to sit one row in front of the couple at TONIGHT’S MTV Video Music Awards! I’m definitely going to be tuning in tonight to see how this all unfolds! Make sure to stay here with us and watch all of our coverage on the VMA’s.

And now I want to turn it over to you guys, what do you think about Nicki’s response to her #2 spot on the Billboard chart and how do you think tonight’s going to go down? Thanks for watching! Please click to the right to watch another new video and don’t forget to subscribe to our channels. I’m your host Amy and I’ll see you next time!

Petra Stunt Is Welcomed Back To Los Angeles

Incredibly imposing property of the 10 RICHEST CELEBS in Hollywood