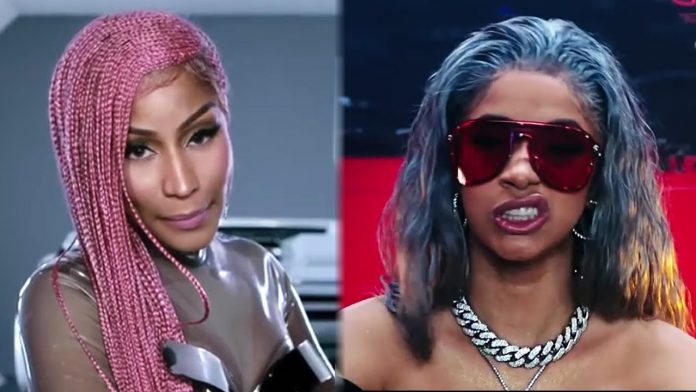 “Motorsport” dropped back in October but now we have the video and it’s a futuristic amusement park experience. Migos is decked out in motorcross gear while flossing some luxury rides while Cardi and Nicki unapologetically steal the show looking like futuristic Zenon warrior princesses.
Then Nicki comes in rocking these pink Barbie braids down to the ground and kills her verse per usual.
Like I said before, Nicki and Cardi easily pulled all the focus, but fans were quick to point out that the two MCs don’t have any scenes together. Cardi has scenes with her fiancé Offset but all other scenes where Nicki is shown are either solo shots or with one of the members of Migos. Some fans even went as far as to say they think Nicki disses Cardi in her verse when she says – “Rap’s Jackie Chan, we ain’t pullin’ them fake stunts/ My crown won’t fit on your bum-ass lace fronts.” But I’m pretty sure Nicki and Cardi killed the rumors that there was any tension between them when Nicki tweeted her congratulatory regards for Cardi after she broke her record. Plus both Cardi and Nicki murder their verses in Motorsport so I’m sure there is mad respect to be had for all. In Cardi’s verse she raps – “Yeah, Cardi B, I’m back, bitches/ I don’t wanna hear I’m actin’ different/ Same lips that be talkin’ ’bout me/ Is the same lips that be ass kissin’.” Followed by a verse where she compares herself to the OG Selena saying – “Let me wrap my weave up, I’m the trap Selena, Dame más gasoline” which some fans took issue with but Cardi quickly set the record straight tweeting QUOTE – “I said Trap Selena because who didn’t wanted to be Selena?She is a alter ego that everybody would want to be and i want the world to know how much i love her.” Selena’s sister even had Cardi’s back during an interview with Power 106 radio saying QUOTE – “I think it’s an honor because it just shows that Selena is a legend.”
The Motorsport video directed by Bradley and Pablo and Quavo has received rave reviews by fans. Someone tweeted – “Who gave Nicki Minaj & Cardi B permission to Send us into orbit like this This Video as a whole is really AMAZING !! They Did That.” Another said – “The Motorsport video is soo Cardi & Nicki really killed that shit.”
Not only did the leading ladies steal the show in the video, they both have new projects for us in the works. Nicki is currently working on a new album which is expected to arrive next year along with a UK tour and Cardi is dropping a new single called Cartier Cardi next Friday! Cardi and Offset also have a collaboration track called “Um Yea.”
It’s a good Friday to be alive my friends. What do you think about the “Motorcross” video? Sound off in the comment section below, don’t forget to subscribe and then click right over here to listen to Camila Cabello’s new music. Thanks for watching Clevver News, I’m your host Drew Dorsey and I’ll see you next time. 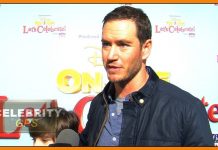 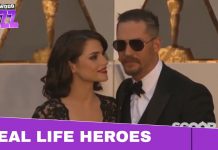