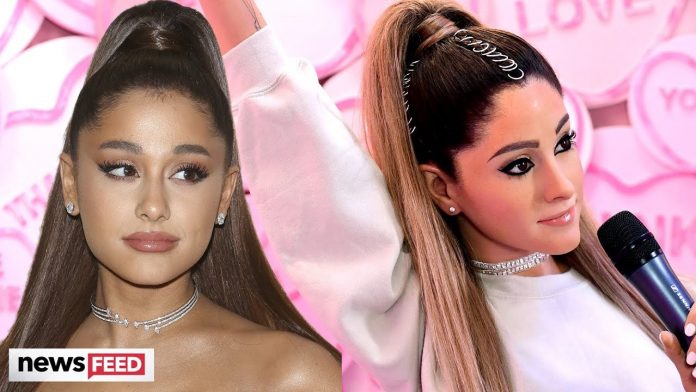 Ariana Grande just got a new wax figure at Madame Tussauds in London and fans are confused and a bit PO’d to say the least.

We all know that Madame Tussauds wax figures can be very hit or miss, like the Kardashians who were a hit and Beyoncé who was clearly a miss.

And unfortunately in this case, Ariana’s figure is also a big ol’ swing and a miss.

Her attire, which was chosen by her fans, was actually on point. Everything from the thigh high boots, to the oversized sweatshirt, to the rings in her high ponytail were all very Ari.

And her tattoos were even in all the right places, so we have to give credit where credit is due.

Buuuut the face ….. DEFINITELY off!

Like I can’t exactly put my finger on what it is, but it’s definitely not looking like Ariana Grande’s face.

The wax figure is pretty and rocking a great outfit, but it’s just not looking like Ariana. … Maybe ariana’s twin … or like alter ego?? Either way we are confused!

While another added quote, “tell that wax figure to move so i can see ariana’s wax figure.”

And there was one fan who just said what we are all thinking quote, “It’s 2019, how do they still fuck up wax figures???”

People think that the wax figure looks like anyone besides Ariana. Fans are comparing it to other celebs, but the most common comparison is to her brother Frankie Grande.

Someone said quote, “This is Frankie Grande in a wig.”

And another agreed and said quote, “this is the first time i can see how frankie looks like ariana because this looks like him with a wig.”

This isn’t Ariana’s first wax figure either. She has one at Madam Tussauds in Las Vegas which is also just a little bit off… still better than this wax figure though, if you ask me!

It looks like there’s just something about Ariana’s face that is impossible to replicate.
Unfortunately, Ari hasn’t commented on the new wax figure yet, so we’ll just have to wait and see what she thinks of it.

But now I want to hear from you! What do you think of the wax figure? Do you think it looks anything like Ariana? Or Frankie Grande? Or someone else all together?

Let me know all your thoughts in the comments section below. You can also hit me up on Instagram, Twitter and YouTube @emileennisjr. After that click right over here to watch another new video and don’t forget to subscribe to our channel and click that bell to get notified whenever we post. Thanks for watching and I’ll see you soon. 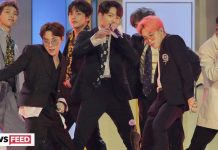